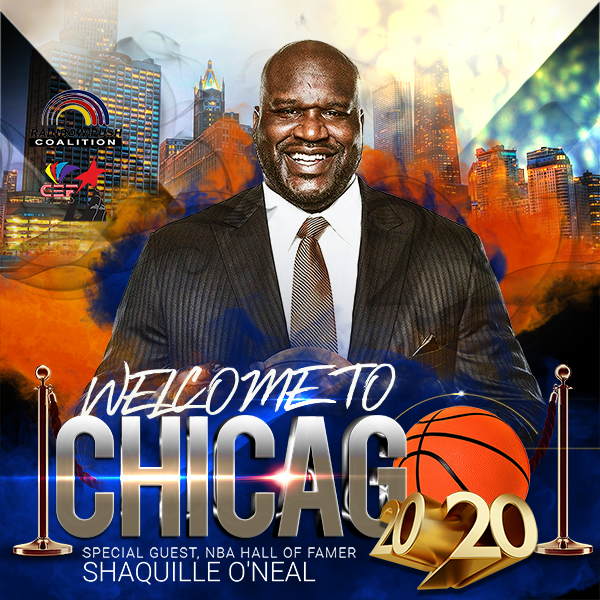 General Admission Tickets $150.00 for a limited time only!

NBA Hall of Famer Shaquille O’Neal and Rainbow PUSH Coalition, led by Rev. Jesse Jackson, Sr., in conjunction with its affiliate nonprofit, Citizenship Education Fund, will host its “Welcome to Chicago 2020” benefit reception as part of the NBA All-Star Weekend festivities on Thursday, February 13, 2020 at 8:00 p.m. at Soldier Field in the United Club Room. NBA Hall of Famers Dave Bing and Isiah Thomas will serve as co-chairs, with Shaquille O’Neal joining the occasion as a special guest.

“The NBA All-Star game comes to Chicago for the first time in 32 years, and with it the eyes of the basketball world,” said Rev. Jesse L. Jackson Sr., “We believe this is a great opportunity to bring attention to and raise funds for a worthy cause that will ensure the youth in urban cities have the technological skills necessary to compete in today’s transformative economy.”

The event will help raise funds to support Cool Kids Code, a program designed to close the digital divide in inner cities by preparing young people for the technological jobs of tomorrow. The Cool Kids Code program was first piloted in Detroit in 2019. More than 200 young people took part in the program. They were exposed to data that would have otherwise been difficult to discover. The success experienced in Detroit has fueled efforts to expand the program nationally, with plans to offer the program in Chicago, Cleveland, Dallas and Milwaukee. Sponsors include General Motors, FCA, Ford and Piston Automotive Group, headed by former NBA great, Vinnie Johnson.

This benefit reception will also help defray expenses related to the Saturday PUSH EXCEL STEM and Robotic programs in Chicago and the PUSHTECH 2020 initiative in the Bay Area/Silicon Valley Rainbow PUSH office. The “Welcome to Chicago 2020” benefit will feature numerous athletes, entertainers, dignitaries and sports enthusiasts from around the world. It will also include great food, musical performances, a silent auction and several surprises.